Christmas eve we had Ken's side of the family over to celebrate Christmas. There is always lots of food and drink. 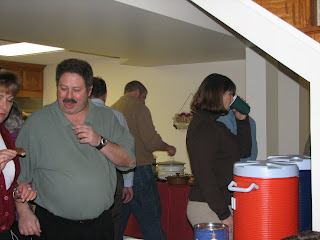 Sampling the deserts before dinner! 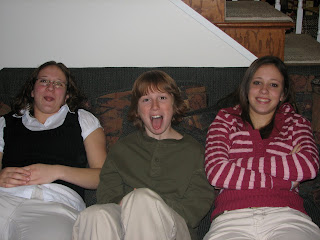 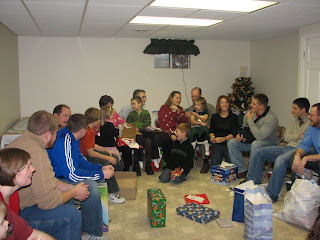 Playing the switch game has become a tradition! This is the Cousins portion of the game then later in the evening the old farts play their switch game. To play you have to bring a present to share, then when it is your turn you can take a present from someone or open a new one. If someone steals your present then you can steal a present from yet another person. At times this game can become intense with players forming aliances to get the present that they want. It can be great fun and everyone seems to really enjoy each other! 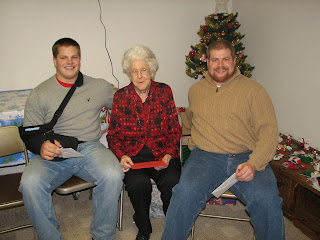 The Boys with Grandma!

After everyone left we had our Christmas. 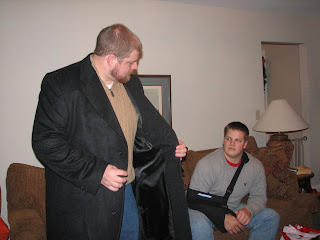 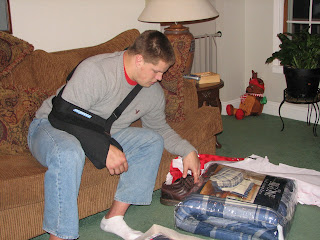 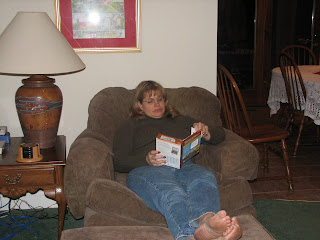 And Cindy collapsed in the Flinstone Chair before going to bed!

Christmas Visitors and a Dilemma Created

The weekend before Christmas we had some very close family friends come to visit.

Donna, Kenny, and Brian came for a short visit from Atlanta. They usually come to town at Christmas as Donna is originally from Quincy and they can stay at her parents house for the holidays. Sometime during their stay in Quincy we usually go out to eat at a local pizza joint then come back to the house for a nice visit. For some reason we failed to take any pictures while they were here so I used this one from Alabama when we met there for a football game. 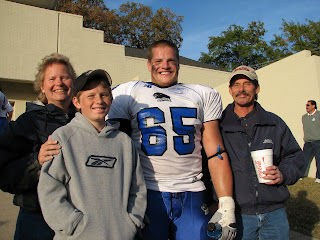 The next morning Luke and Lindsay stopped in. Luke and Kyle were best buds all through high school and Luke spent a lot of time with us during those years so we claim him to be our third son. Luke and Lindsay have been together for several years and have been married for one year. 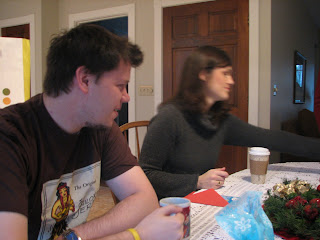 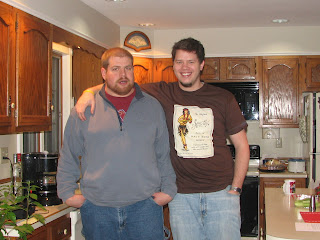 Luke and Lindsay brought with them a gift in remembrance of Cindy's experiment with Sailor Jerry's Rum. At one of the home football games Luke, Kyle and Cindy's best friend Cheryl had all came to the game. Cindy and Cheryl decided to try some Sailor Jerry and Coke rather than the usual Captian and Coke. After a few drinks they came to realize that Sailor Jerry has more punch that Captian. You will have to ask Cindy about that day and in particular what happened at half time. 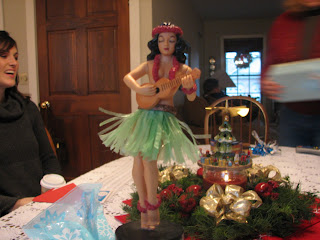 Luke was really taken by the looks of the Sailor Jerry Girl! See any resemblance to Lindsay!

While it was great to see Luke and Lindsay their small gift has created a big controversy! Some in the family think we need to replace Homer with The Sailor Jerry Girl. Homer has had a place of honor on the dash of Baby since we bought her! Should Homer be replaced by the first pretty face to come along? 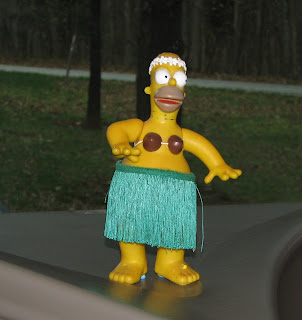 Look at Homer! Only a really desperate person could love that face...Ah but he can sing! Push the button on his toe and he sings or he gives us some of his words of wisdom!

Now look at the Sailor Jerry Girl! Wow! She does not need to talk..if she did she might ruin it! 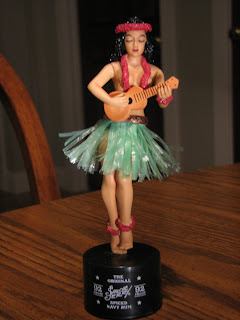 Every year, two or three weeks before Christmas, Cindy's sister makes Christmas candies and cookies. Her entire family stops by to help. From the youngest to the oldest they all take part. This past year Cindy was invited to stop by and help too. 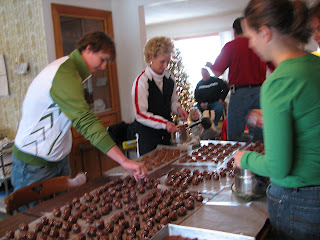 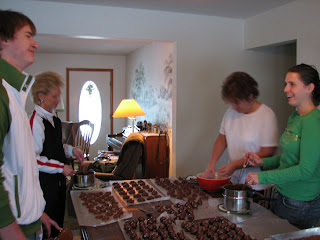 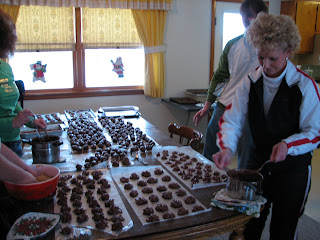 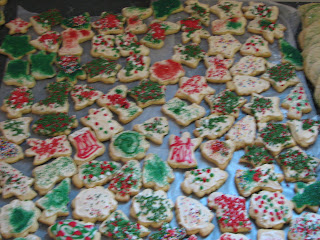 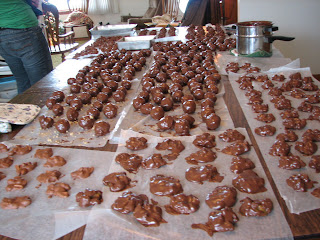 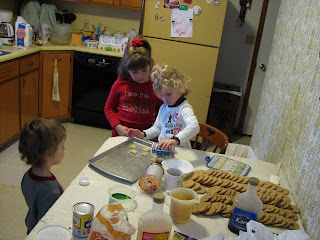 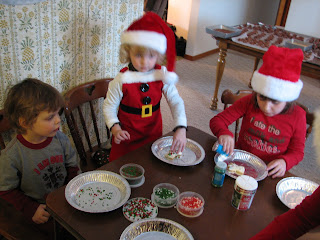 It is a lot of work and every available flat surface is used for "cooling." When the majority of the work is done, everyone takes a break for soup and sandwiches. It is a great family day creating wonderful Christmas memories!

Sorry we have not written in a while. A lot has been happening and in order to get you caught up I will go back to December 13th and Trev's shoulder surgery.

Trevor finished his finals and drove home the 12th of December. Upon his arrival we packed him and our stuff into the car and headed to Columbia Missouri for his shoulder surgery. Since his winter break was four weeks long, he scheduled his surgery at the earliest possible date thinking he might have an outside shot at being ready to play during spring ball. After spending the night in a local motel we were up early and on our way to the Columbia Orthopedic Group out patient center.
After confirming insurance information and drug allergies we only had a short wait till they called Trevor to get him ready. While Cindy and I waited she read while I worked on a jigsaw puzzle and chatted with a lady that was waiting for her mother. Before they took Trevor into surgery they called us to come sit with him for a bit. He was feeling no pain! In fact he wanted to know what that stuff was in that IV and if he could take some home with him. We had fun at his expense for a little while, then they ran us out so they could take him to surgery.
Back in the waiting room we resumed our preferred activities of reading and chatting. Tick, tick, tick....tick. The wait was not really that long, but it always seems longer than it actually is. It was not long before the lady I was talking to got called. They took her to a small conference room and explained that her mom was in recovery and that everything had gone well and then they gave her some pictures of the actual procedure. Her mom had a bad and painful ankle for years. To alleviate the pain and to stabilize the ankle they ran a screw through her heel up into her ankle.
After a while it was our turn. A nurse lead us to the conference room where we met the Doctor. The Doctor first told us that the surgery went well, however his shoulder was damaged much more than suspected. Instead of having a tear in the front and a partial tear in the rear, Trevor had much more damage. His shoulder had popped out of joint so many times that he had tears both front and rear, torn his rotator cuff, damaged the shoulder socket, had chips floating in and around the socket, and to top it off the damage was starting to cause arthritis. The Doctor said he felt like he had done some of his best work and that Trevors' recovery would have to be extremely slow.
Trevors' arm was placed in a sling in what the Doctor called a gunslinger position. Imagine your elbow resting against you side with your hand pointed straight out in front of you. He was not allowed to remove his arm from this position or the sling for four weeks. It was good that he was going to be home for a while.
Trevor had an amazing doctor, Patrick Smith, do the surgery and the medical/training staff at EIU is as good as if not better than some of the bigger schools that we've dealt with. The biggest problem with Trevors' recovery is going to be Trevor. He loves football, he likes working out, he is relentless in the way he plays the game. That is what makes him so good, but it could also be his downfall if he is not patient enough to let his arm heal before he tries to begin lifting weights.
Trevor, remember what the Doctor said, NO WEIGHTS with that arm till June. KP