Traditionally, Christmas for us starts shortly after Thanksgiving.  Kyle and Jenni helped get the decorations started on the Saturday after Thanksgiving.  Then while Cindy worked I continued cleaning, decorating some everyday till I got the house ready.  Then it was shopping.  Most of our shopping is done on line, which I think is much easier.  Things that may not fit or might get exchanged we try to buy locally.

But this year was different,  WE GET to BUY TOYS!!!!!  On weekends when Cindy was home we would walk the toy isle to see what was new.  We were amazed that some of the toys were the same as they were thirty years ago.  We had fun playing with the toys in the stores and before wrapping them.  I thought we were almost done (we only needed one more present) when the grand parent urge hit.  I had picked Cindy up at the St Louis airport and we had stopped to eat as we usually do.  At dinner we discussed where we were on the Christmas preparations: Decorations, cleaning, party plans, all done and presents one to go.  We only needed stuffed Santa or other Christmas like stuffed creature for an exchange gift.  Toys R Us was around the corner so we stopped there. That was a mistake for new grandparents! Too many toys! As you guessed our “one more present to get” turned into several filling the trunk!

Another part of Christmas that Cindy would not miss is the candy making Sunday at Kathleen’s.  This year was different here too.  Kathleen is undergoing cancer treatment so the girls stepped up to take a greater role in the kitchen while Kathleen took breaks in the recliner.

The kids help with the organized confusion!

The girls really have fun making the candy.  Cindy’s sister Kathleen usually organizes the proceedings with her three daughters and one daughter in law and of course Cindy.  They work from mid morning with help from the kids and occasional help from the guys (between the football games).  The day ends with a very tasty roast beef and turkey sandwiches fixed in crock pots.  The homemade candies are used as treats at the various work and home parties and some are given away as presents to some lucky people.

The week before Christmas, our neighbor called looking for my help.  The Santa for their school was sick and she was looking for a stand in Santa.  Having never done anything like that before, I was very hesitant to do it.  I did not want to disappoint the kids by making a mistake and ruining their Christmas.  But if I didn’t step up they might not have a Santa at the school party.  So I did it!  The school is K through 3rd grade with one special ed class.  I had help from a pair of helper elf's that made my job easy.  One elf organized the tee shirts and checked to make sure the next room was ready for us.  The other elf  lead me around and helped pass out the candy canes and tee shirt to each child.  All I had to do was play the part and have fun with the kids.  The toughest request that I was asked was: “All I want for Christmas is a ride in Santa’s sleigh.”  Luckily we were interrupted before I attempted a answer.   All in all the kids were great and I had a great time too.

Dress rehearsal with Sox and Ditka! 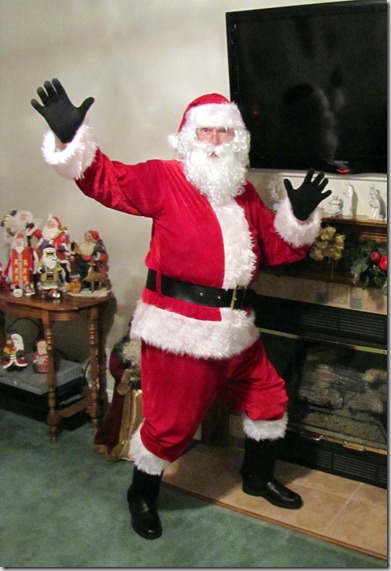 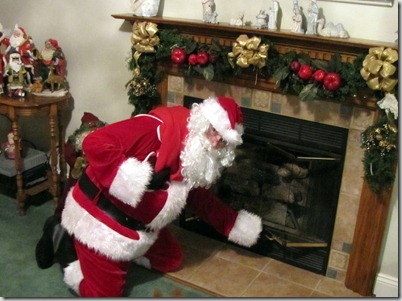 Too late to sneak up the fireplace! 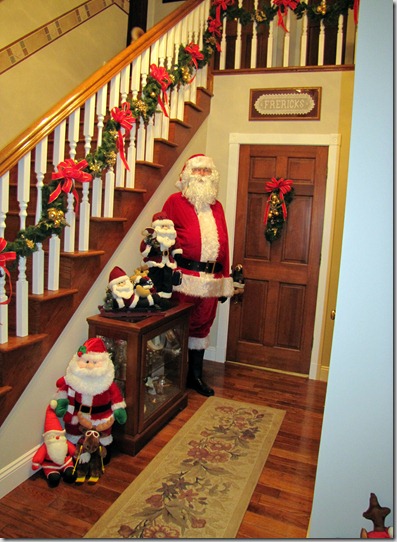 Ah! This works, blending in with the other Santa's!

While working from home Cindy would take breaks to wrap presents. 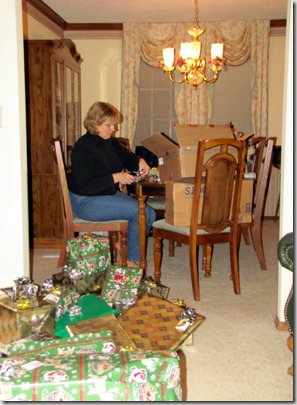 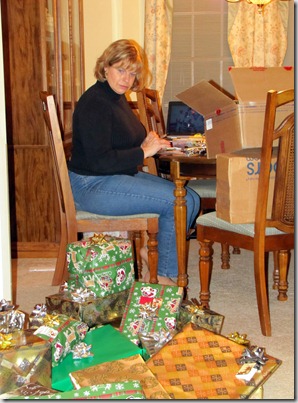 Christmas eve is our big Christmas celebration.  Most of the Frericks family get together at our house for the evening.  During the party I move the dog gate to the top of the stairs to keep the dogs confined. 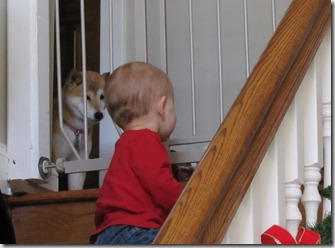 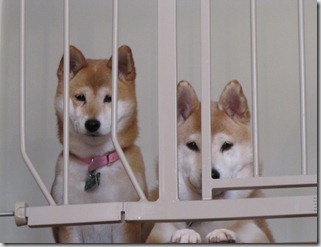 Ethan came in the front door and went right up the steps to see the dogs.  His parents did not even get their coats off! 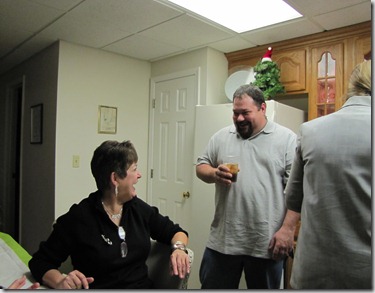 Ron and Lois are in the party mood!

We played our exchange game and ate before I was talked into: 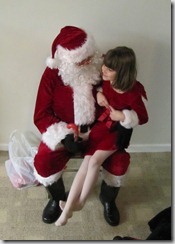 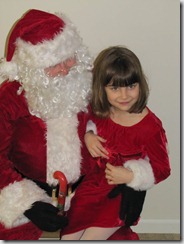 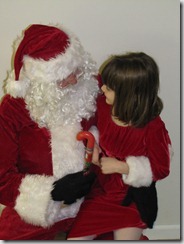 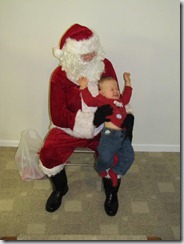 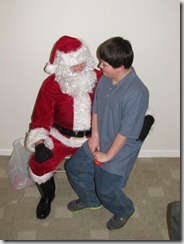 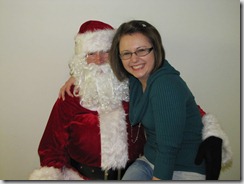 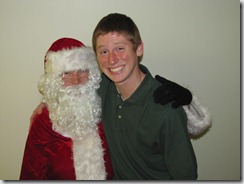 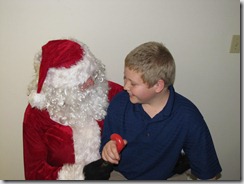 Eventually the party wound down and everyone headed home.  Then it was our turn.  It has become a tradition that after the party ends, the immediate family opens their presents. 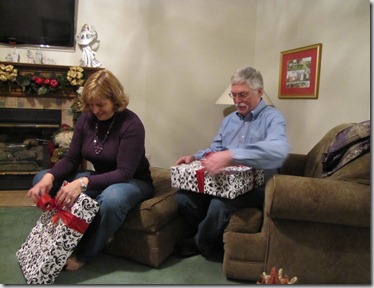 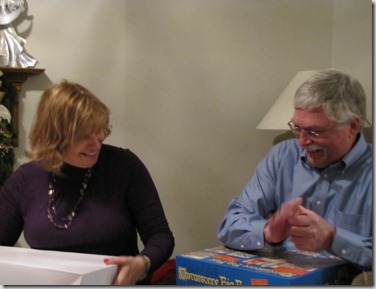 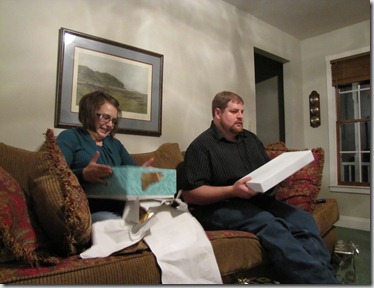 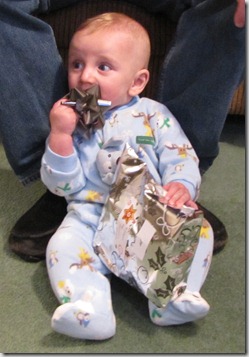 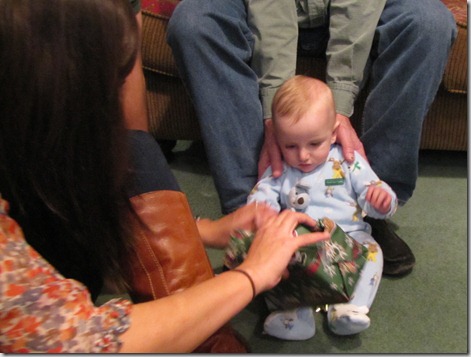 The center of attention!  Like most kids his age Jameson was more interested in paper and bows than the toys. 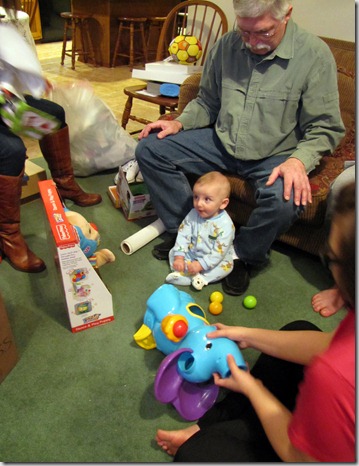 The look says it all … can I play now! 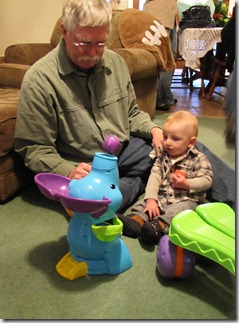 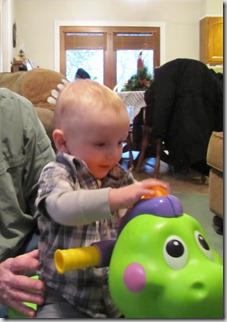 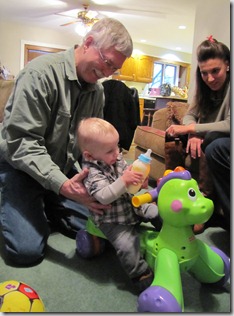 All too soon it’s all over!  The house was full of noise and activity crowded with people everywhere, then all of the sudden the house is quiet and empty feeling.  Trevor, Leah, and Jameson left first so they could get back for their jobs.  Kyle and Jenni were able stay a little longer, but they too needed to get back to work.  For the first day or two it was a little clean up and a lot of relaxing.  Cindy resumed work from home and since it was unseasonably warm outside I took down the outside decorations.   Then the flu set in.  First Cindy then me.  Neither of us felt fully recovered till the new year.  Now the house is back to “normal” and Cindy is back to work.  Her first assignment was to be in Cincinnati for two days.  Since it was only two days I decided to play chauffer and drove.  So today I’m writing this blog from the motel room.  Tomorrow while she works I’ll  explore the area a bit.