Last Game of Season and Thanksgiving

The last game of the season was against Tennessee Tech in Cookeville Tennessee. That is about a 10 to 11 hour drive in the RV. We left Quincy as soon as Cindy left the office at 11:00. Like usual she continued to work while using a half day of vacation and I drove. What was different this time was that we went through St. Louis to save time. It is about 30 miles shorter going through St. Louis and a little faster in that we avoid some two lane highways and the small towns. We just have to be through St. Louis by 3:00 or 3:30 when traffic begins to pick up for the rush hour. We made good time and beat the heavier traffic. 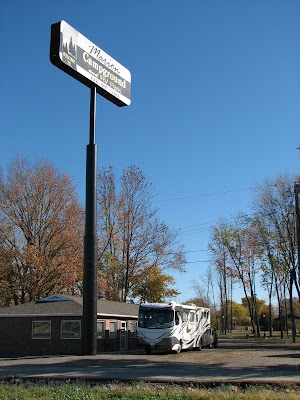 It was a cold night dropping into the middle teens. We made it OK but while I was packing up, I noticed that our neighbor was leaking water from the area of his hot water heater.

This morning was a good test of our communication systems. Cindy's work provides her with an air card for the computer and a cell phone. However, we had run into problems with being able to maintain connection either while moving or due to the remoteness of our location. Today while on vacation she was able to participate in a four hour tele-conference that used both the computer to display the topics and the telephone for discussion. 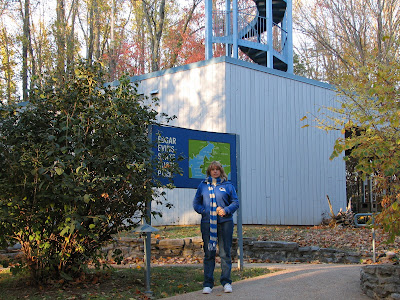 This is the visitor center with its' viewing tower. The tower is in the center of the building and you can see the bottom of it in the picture above. 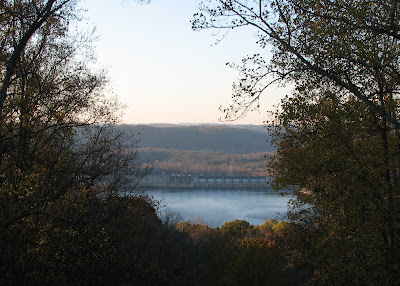 This is the view of the dam from the tower. 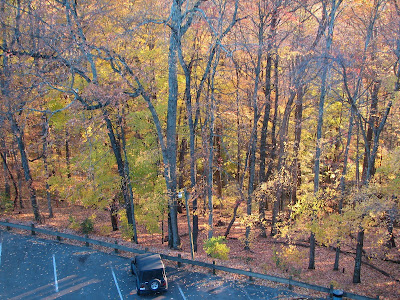 This is the view to the side of the tower. Surprisingly, there was still color in the trees. 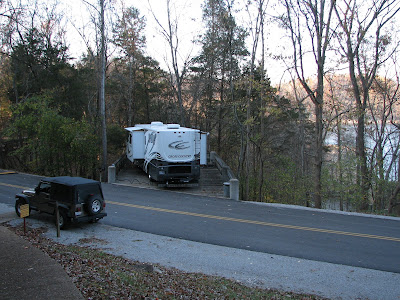 Our campsite in the park. We just fit!

All the campsites are platforms that are made up of 4x4's laid across big I beams that are held up by concrete pillars. It is kinda like parking on a dead end bridge! 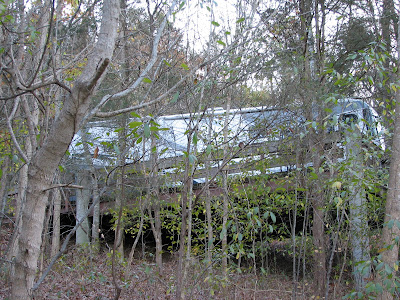 The views were excellent! 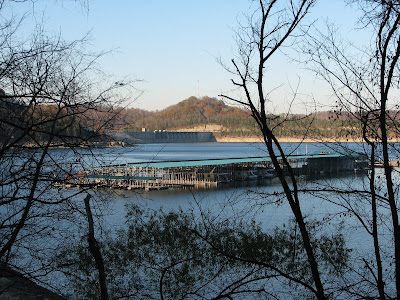 The dam and part of the marina. 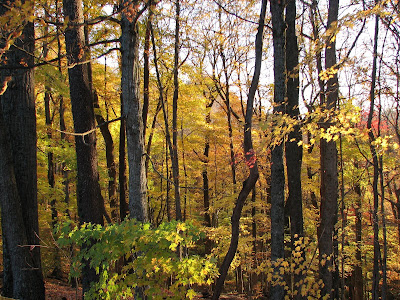 Some trees still held onto their color even though the temperatures were dropping. 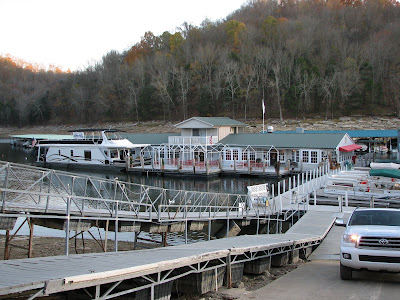 The park had a very large marina. There were numerous house boats in the marina and some of them were quit large. Also there is a restaurant in the marina that is quit good. It is not a burger joint. They have a five or six item menu and the meals we had there were excellent costing about $15 a person. Well worth it! 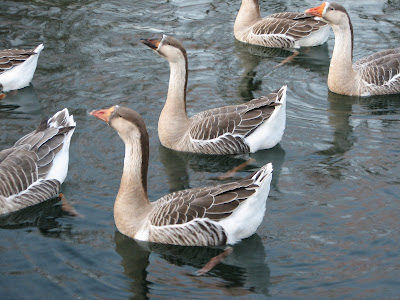 Of course there were ducks at the marina. 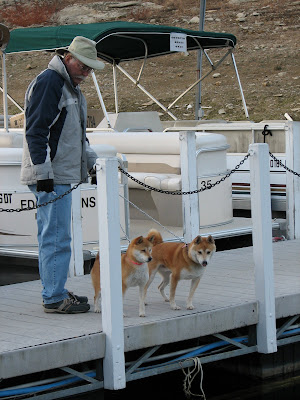 And of course Ditka and Sox wanted to jump in with them.

Edgar Evins State Park is about half way between Nashville and Cookeville and is only 5 to 6 miles off the interstate. But because the road has so many hills, twists, and turns it feels like it is more than that.

It was a nice surprise when the Larson's called and agreed to stop by on their way to the game. They had taken an early morning flight from Chicago to Nashville and had time to kill. After visiting for a while we headed into Cookeville for the game. 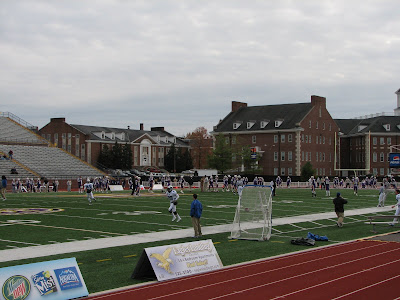 Tennessee Tech stadium is open on the end allowing this view of the campus. 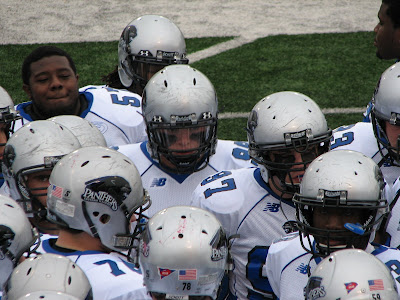 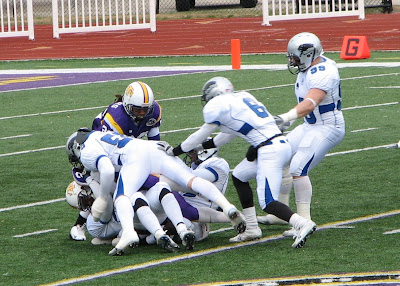 Piling on! Boys will be boys. 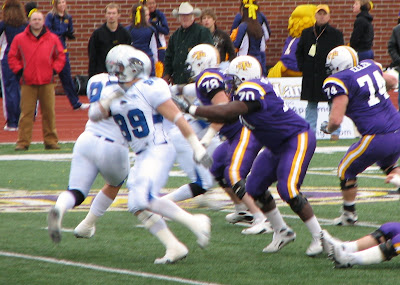 This game was a different from the past few games. We were not the 3 dives and punt or the two dives and two yard pass team today! We played like we did at the start of the season! We threw the ball down field, we spread out and ran the ball, and of course we did run a few dives. The important thing is that we mixed it up! It was the first game in a long time where their defense had to cover our wide receivers, the past few games the defenses would not even pay attention to our wide receivers because they knew we were not going to throw the ball down field. This allowed them to pack it into middle to stop our running plays. By throwing the ball down field it kept the defense honest and allowed our running plays to work. Also, our defense was not on the field for two thirds of the plays allowing them to be fresher and play harder. A much better game all around.

This was a good game for the seniors to go out on. It will go a long way to erase some of the bad things that have happened during the season. 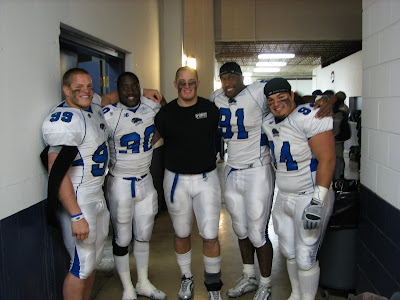 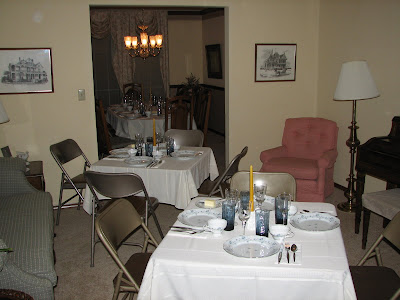 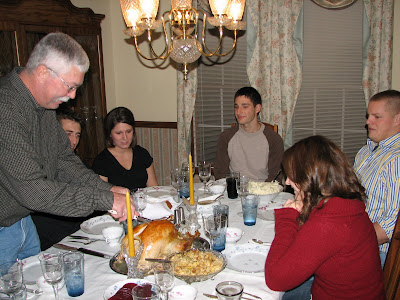 We had the traditional Turkey cutting by the turkey! 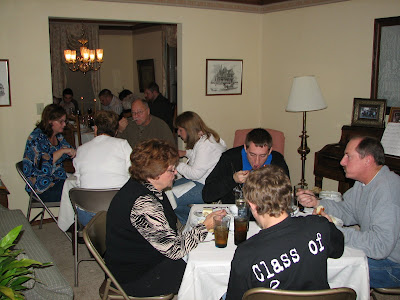 It gets real quite when everyone has a mouth full!
It was a very nice day shared with family, just one more thing to be thankful for!