A typical day here is up at six. While Cindy gets ready I make coffee, then a short walk with the dogs, and then fix a couple eggs for Cindy’s breakfast.  We usually leave the RV around seven. It takes twenty five to thirty minutes to get to her place of work depending on traffic.  So I am usually back at the RV by eight or eight fifteen.  We found a way to get to her office avoiding the Interstate using city streets. It is a lot less stressful and no traffic jams.

After I get back to the RV is when I cleanup,  fix my breakfast, watch the news I recorded, and take the dogs for a longer walk. By then it is ten o’clock or so and time for a nap.  Ah the life of a kept man!  After my nap it is time to eat again.  Most days I will eat leftovers at the RV but occasionally I will run to town to eat with Cindy.  She found a small Thai restaurant that has great food and good service, so it has become a favorite lunch stop.

In the afternoon it’s another walk with the dogs and chores of some kind or other before leaving to pick up Cindy.  About half the nights we eat at the RV the other half we eat out somewhere. That’s the fun part of the day. We had never been to a Red Robin so we had to check them out.  But the best was one night when we made a wrong turn and ended up across the street from a strip mall.  Cindy can spot a restaurant any where and she spotted one in that strip mall, and it was a good one.  It was an Italian restaurant called Maisanos (I am learning…you just witnessed my first link!).   It is a small nicely decorated family restaurant with the owner hanging around a small bar greeting people as they came and went.   Cindy is much better at choosing wines and again she picked a good one.  With the wine we had our appetizers of soup and then our meal.  This restaurant is known for the sauces they use on the entrees but the soups were excellent also.  One of the best meals we have ever had at any price.

On Friday night, we went to a play at the local playhouse.  The Farmington Players (#2 link…. not a virgin anymore!) presented To Kill A Mockingbird.  The young girl that played “Scout” the daughter of the stories hero was spell binding, she was that good.  The playhouse is in a converted barn so it has a unique appearance from the outside.  The stage and seating were nicely arranged with comfortable seating and good acoustics.  It was a nice evening.

Cindy had heard from the people she worked with that there was a minor league hockey team in the area and that they were fun to watch.  So on Saturday evening we watched our first hockey game.  The Plymouth Whalers play at Compuware Arena in Plymouth MI which is only 10 to 12 miles from the RV park.

It was Pink Out! night at the hockey game and the home team were wearing pink and black jerseys and the crowd was encouraged to wear pink.  At the entrance to the arena anyone who wanted could get their hair painted pink … Cindy said she would do it if I would and I politely used the excuse that we were going out to eat afterwards. 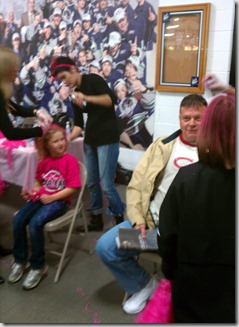 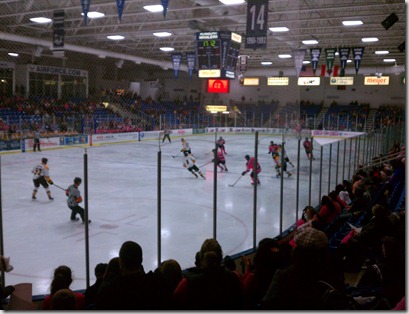 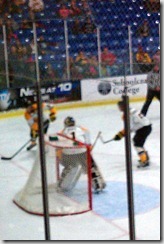 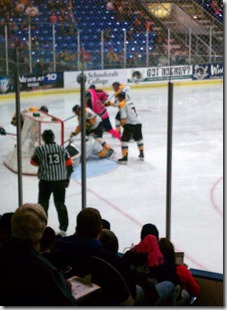 The opposing team had a keeper with the name of Hope and wore the number one.  So we teased that they had only one Hope and later when he was substituted out we teased that now they had no hope!  It was a great game, the Whalers took an early 3-0 lead in the first part of the game and had a lot more shots on goal.  But the visiting team came out with a more determined attack and out shot the home team sending the game to overtime, then eventually winning the game.   An exciting game!  Now Cindy wants to go to a pro game!  Before we do that we will need to figure out that blue line .. we determined that it had something to do with offside but not exactly.  Good times!!

Next week will be a short week as Cindy will work while I drive and we head to Eastern Illinois for Football on their homecoming weekend!

After our babysitting weekend I had planned to go to Carlinville to work on my son Kyle's house.  However, his wife Jenni was sick with a sinus infection so I told them I would do it at a later date.  So now I had three unplanned days.  Well if your me and you have unscheduled time what to do what to do?  I did my favorite thing not much.

After driving back to Quincy, I cleaned and washed the RV.  That took all of Monday and Tuesday. Wednesday I did a little yard work and played cards with a buddy of mine. Thursday did laundry and did some repacking of the RV before heading to St. Louis to pick up Cindy.

Friday was Cindy’s hair and nails day and then a visit with her sister.  Me it was some errands and another card game.

Saturday we drove to Kankakee River State Park for the night.  We called Trevor and Leah and they met us in Frankfort for dinner at  a nice Italian restaurant called Francesca’s.  The food was excellent! Leah and Trevor had been there before so Leah ordered some of their really good appetizers with some risotto to share.  We had wine with dinner then some of us had a cappuccino for dessert.

Sunday morning we continued our drive to Detroit area.  We arrived early enough to explore a different route from the RV park to Cindy’s place of work.  The GPS was taking us onto the interstate for a few mile before exiting again.  The problem with this route was that there were two lanes in the on ramp joining three lanes on the interstate so it was five lanes quickly reduced to three lanes.  Every morning this intersection was a mess.  We found two other ways that were both faster and much less stressful than the interstate.  So it was well worth the time it took to find these routes and once again you can not always trust the GPS.

So Monday morning I took Cindy to work and got back in time for these early morning pictures. 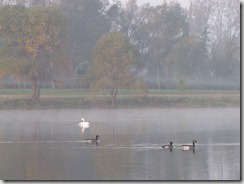 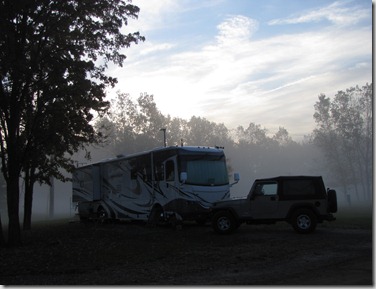 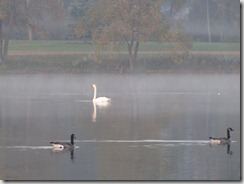 A Week End With Jameson

When we last saw our hero I was dropping her off at the St Louis Airport on Monday morning with plans to pick her up at O'Hare in Chicago on Thursday evening. So on Wednesday I drove the RV to Joliet and Leisure Lake Membership Resort. 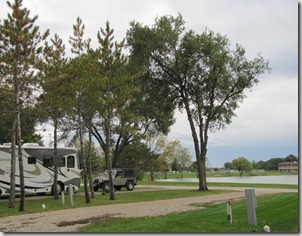 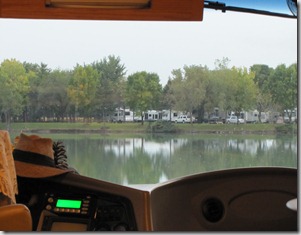 Our campsite and view out the front window. Leisure Lake is a membership campground but they keep a number of sites open for short term stays. It is a nice park and is generally clean and well maintained but can get crowded and slightly rowdy on the major holiday weekends. Otherwise it is a nice place to stay.

After picking up Cindy we went to Portillo’s for dinner. We really enjoy their Italian Beef Sandwich and Chocolate cake. They are located all around the Chicago area and I have not seen them anywhere else. Our daughter in law Leah took us to one on one of our first visits to the area and it has become a favorite for a quick and good meal.

Friday morning we picked up Jameson at Trevor and Leah’s. They were going with another couple to see friends of theirs that had move to Minnesota to coach football. So we had the honor of taking care of Jameson Friday, Saturday, and most of Sunday. 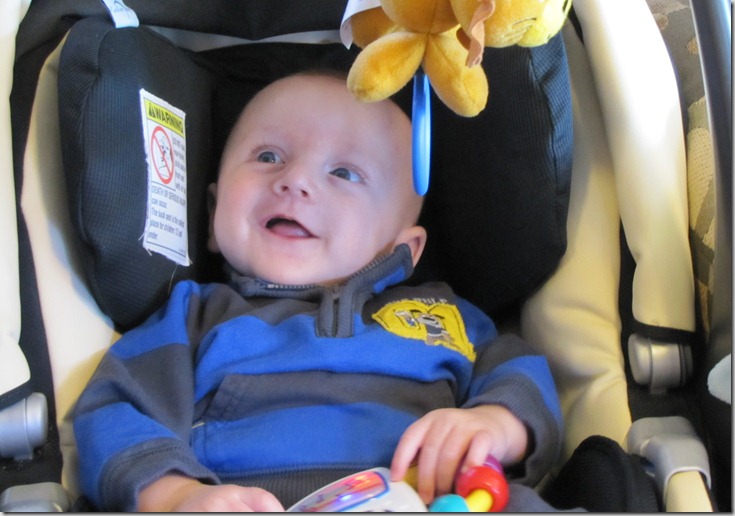 Jameson is such an easy baby to care for … We and the kids are very blessed to have such an easy going baby!! 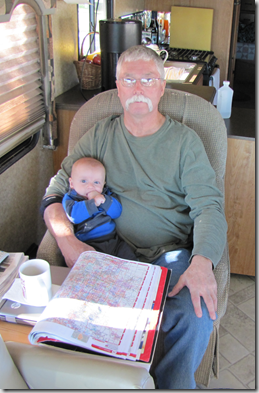 While Cindy worked via phone and pc, Jameson and I watched college football, drank coffee and studied the maps looking for those elusive shortcuts. Cindy did eventually get me out of the chair and we took Jameson and the dogs for a walk around the lake. But first we had to figure out how to assemble the stroller. Here we go showing our age we can’t even figure out how to use a stroller! We eventually got it and had a nice walk that we repeated a number of times over the weekend. 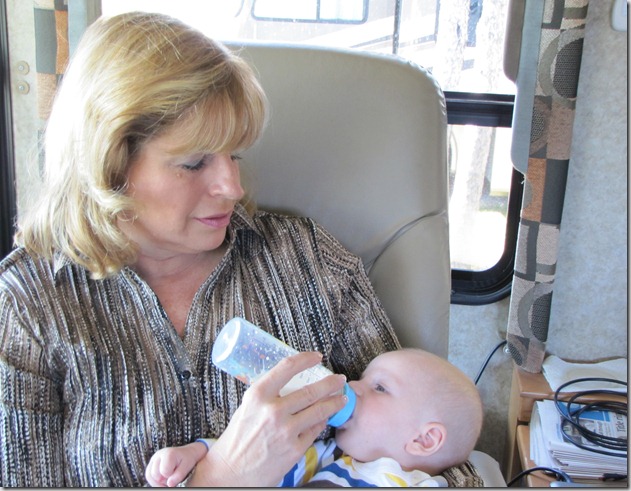 Eventually Cindy was able to pry Jameson away from me for a turn with the baby!

Sunday afternoon I delivered Cindy back to O’Hare before dropping Jameson off at Trevor and Leah’s. I was not keen on the idea of driving from the airport to their house with Jameson alone in the backseat. I was worried about him getting upset or needing attention during the 45 minute drive, but again he was calm and slept most of the way.

So ends a happy weekend with the grandbaby!