Home for the Holidays

The Frericks holidays were spent almost entirely at our house.

Christmas Eve we had Ken’s brothers and sisters and their children and grandchildren. We baked a 25lb ham and everyone brought covered dishes.

Nephew Joe Gallaher called from his post in Germany and just about everyone talked to him on the phone. That phone went around the party for at least an hour! Glad you didn't call collect Joe, and, btw, you owe me since I'm the only one that ended up not getting a chance to say Merry Christmas to you. I know...you probably just couldn't keep all those German frauleins waiting one minute longer. 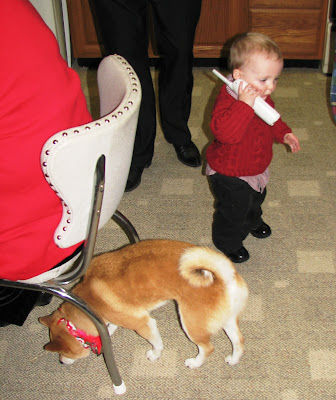 His nephew, Aiden, certainly thought it was quite the deal to get to have a phone with Uncle Joe on the other end. Meanwhile, Sox and Ditka were on the prowl for treats that may have made it down to their level. 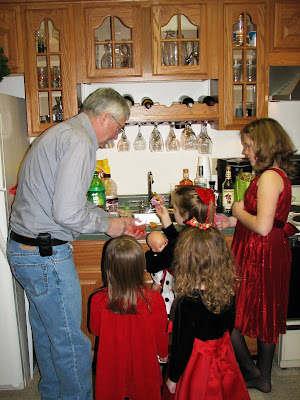 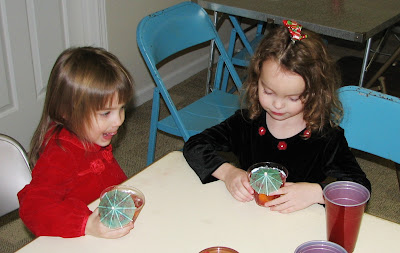 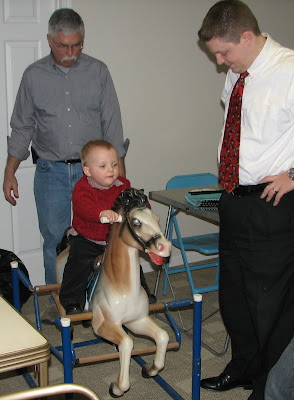 Ken brought out some of the 20+ year old presents from the Frericks boys Christmases past.
Aiden was quick to prove to Daddy and Uncle Kenny he was quite the little wrangler.

As usual, Ken was keen to have the party cleanup finished before bedtime so it was already Christmas before we hit the sack. That meant everyone slept in and it was actually a bit of a rush to get all of us through a late breakfast and showers in time for the 12:15 showing of ‘The Curious Case of Benjamin Button’. It’s been a tradition to do a family holiday movie and although there was some family controversy about which movie, it ended up that we all REALLY liked this movie which is tough to come by in this family! We’d been invited to drop by the Elkins house (my boss) for holiday cheer and spent a couple hours enjoying their hospitality. They had a new air hockey table which was the center of activities and Kyle helped them set up their new Wii.

I had promised Christmas Day grilled Salmon to my crew so we cranked up the grill when we got home. Kyle’s Jenny had joined us for the day’s activities and Salmon is one of her favorite foods…this girl has good taste in lots of ways!

The day after Christmas was the next get-together at our house for the Duesterhaus (my) side of the family, inviting my brothers, sisters, their children and grandchildren. This evening, considering people had already been through several days of Christmas, we stuck with everyone bringing snacks to share instead of planning a meal. Besides my traditional nacho cheese and chips, I tried out the 5lb bag of buffalo wings from Sam’s Club. They definitely get a thumbs-up for easy entertaining fare that rivals restaurant wings. 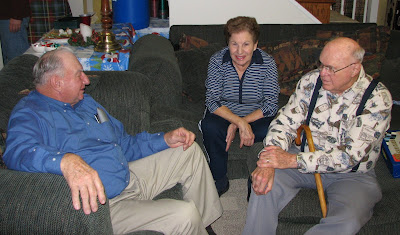 My brother Bobby was having knee surgery on Monday so sister Betty and husband Chuck were filling him in on what to expect. (All went well and he’s home recuperating). 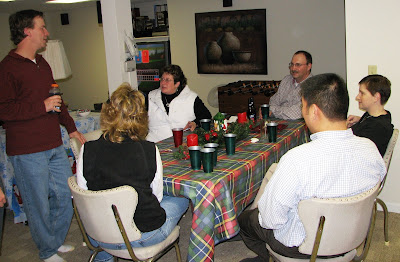 Five of Bobby’s six kids were able to attend. 3 of Kathleen’s 4 were able to make it, so we had a nice turnout. I think the nieces and nephews really enjoy this time together since they don’t see much of each other outside their immediate families the rest of the year. Michelle and Jason had traveled farthest coming in from Herndon, VA.

Sidenote: Jason and Michelle moved recently from Albuquerque to Virginia as part of Jason’s job with Sandia labs. Around Thanksgiving Michelle had a series of baseline tests at John Hopkin’s since they were taking over her case after the move. Unfortunately these tests showed that despite otherwise positive results from her stem cell transplant a small pocket of leukemia cells were still hiding out in her chest. She has to go back into chemo/radiation therapy which she starts when she returns to Virginia after the Christmas travels. We are hopeful this will be a matter of simply scouring out this particularly sneaky little pocket and things will be looking good again on that front. You can keep up on Michelle's progress with her journal link which you'll find to the left as one of our Favorite Websites.

My niece, Sheila and her daughter McKinley gave me an unexpected gift that was the most treasured of the holiday. The gift was a Christmas recipe scrapbook containing all of the 15 cookie and candy recipes we make along with lots of fun photos from the past years candy days. 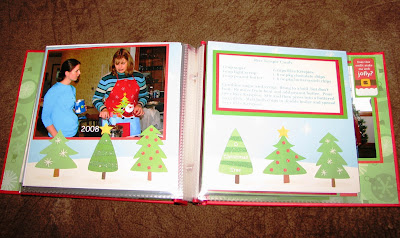 As you may recall from last year’s blog, since my mother past away in 2006, my sister and her girls have been including me in their candy-making day. This is a really fun day for both grown-ups and kids…in fact, my pre-school age great-nephew, Carter, exclaimed as he decorated cookies this year that this was his “favoritist day in the whole year, even more than Christmas!” 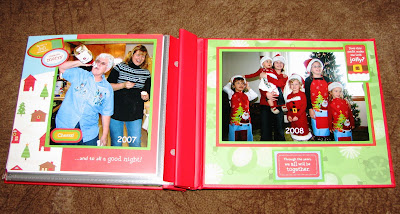 The kids all dress up with Santa aprons and hats and they get there hands into a little bit of everything from squishing rice krispie/peanut butter mixture into balls (boy does than end up everywhere) to drizzling the chocolate covering over the turtle candies. My sister, Grandma Kathleen to the little one’s, is wonderfully accommodating and patient. She was joking in the picture above that it was because she keeps the bottle of Jim Beam handy! Obviously this recipe book will be treasured for years for a lot more than just the recipes.

Well, Friday night, once all the Duesterhaus family were on their way, it became apparent why Trevor had disappeared from the festivities. He had come down with an awful case of stomach flu and was hiding out on the second floor. He was the most sick I’d seen him since he was a youngster. He had a pretty long night.

Saturday, we were scheduled for yet another holiday tradition, meeting our friends from Atlanta, the Elsworths, to go out for pizza at Cassano’s. Cassano’s is a local pizza joint that Elworth’s always like to take in on there holiday trip back to Quincy so we usually follow that with them coming over to the house for some holiday cheer, a few video games, maybe some foosball. Well, Trevor was still weak as a pup by mid-afternoon Saturday and Kyle informed us that Jenni was now down with the same flu bug. Lo and behold, by late afternoon, the darned ol’ bug had found me as well. It ended up that by dinnertime only Ken and Kyle were up to meeting for pizza. In fact, by the end of the evening we got a call from Kyle that he was at the hospital emergency room with Jenni and she ended up getting an IV to try to get her re-hydrated. Nasty, nasty bug.

Amazingly, everyone seemed to be back to normal by Sunday afternoon. Kyle and Jenni went back to Carlinville, so Kyle could get back to work.

Ken was pretty worn down after all the parties and I had things to do for work before year-end so it seemed the early part of the week flew by without much happening.

Tuesday Trevor left for Chicago. One of his football buddy’s Dad got several tables at the Hyatt New Year’s / JACK-FM New Year’s bash. Sounds like they had one pretty interesting evening planned. Trev called long enough to tell us he accidentally forgot his phone, gave us an emergency number if needed, and we haven’t heard from him since! He is supposed to be home Saturday…nothing like a 5 day long New Year’s celebration.

Kyle and Jenni came back to town New Year’s Eve and hosted some friends at her apartment.

I threw together a spaghetti dinner and after we ate Kyle and Jenni left to have a post New Year’s gathering at her place to get rid of the leftovers from the New Year’s party and, yes, watch more football. Meantime, Ken, headed back to the basement to start taking down some of the decorations while watching, yes, more football!

I’m headed to bed since I will be working tomorrow. Seems like the holidays fly by faster every Christmas!

Wishing all of you the very best New Year ever.