Trevor started his new job with McGladrey in Springfield, IL  on November 1 with two weeks of training in Chicago.  His apartment in Springfield was not yet available.  His Quincy Notre Dame high school team, where he was an assistant coach, was working their way through the state playoffs and were playing in Breese, IL the first weekend in November.  Their next round opponent played in Rochester, IL on Friday night of that weekend and the coaches were going to Rochester together to scout the team.  Somewhere along the line Trevor needed to get his vehicle which was still in Quincy since he took the train to Chicago.  Leah, still in school in Charleston, REALLY wanted to see Trev over the weekend since they don’t seem to be able to handle more than a few days apart!

Hmmm…Trev needed to be in a lot of places in Illinois over one weekend.  We decided to help him out with some of this logistics by bringing his car from Quincy as far as Kyle’s house in Carlinville since that would be on his way in between Rochester and Breese.    At the same time, Ken really wanted to  go to the Breese game and had major hitch-itch so he drove the RV down to Beaver Dam State Park on Thursday for a long weekend. I followed the next day in Trev’s car so I could get keep my Thursday hair appointment back here in Quincy.  It turned out to be a good plan since Beaver Dam gave us a central location to spend some time with Kyle and Jenni, some time with Trevor and Leah, and still a little time to enjoy the beautiful autumn outdoors. 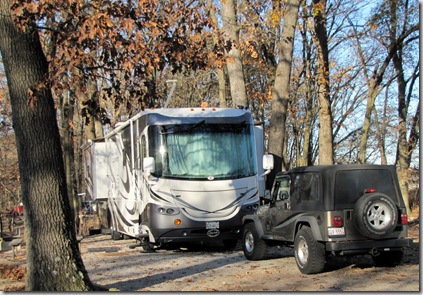 Ken settled in to site 40 with 50 amp service, since it was suppose to get below freezing and this allowed him to run both of our electric heaters.

Ken really enjoyed having some quiet time on his own and did lots of walking with the dogs through the woods and around the lake. (Reminder: mouse over pictures for captions). 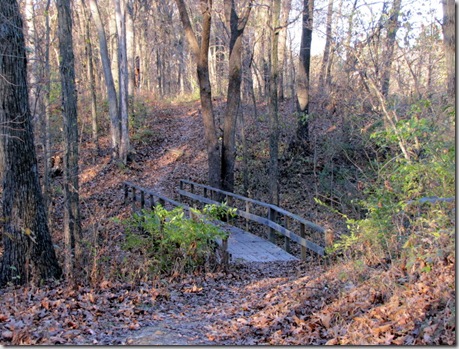 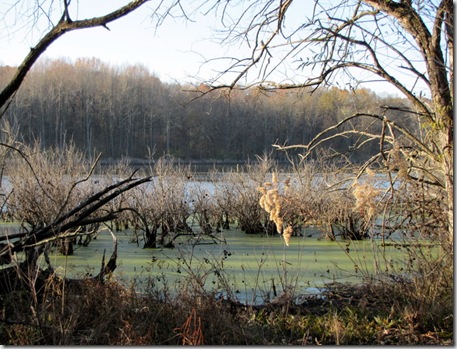 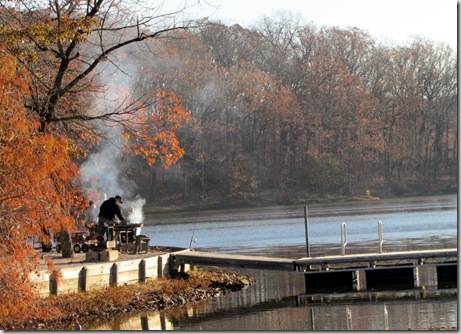 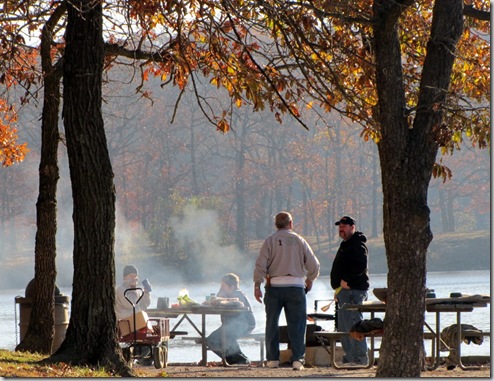 We took Kyle and Jenni to Ryan’s Pub for dinner on Friday evening.  That same eveing, Trev took the train in to Springfield where Leah picked him up and helped him pick out a winter coat for work before they joined the coaches at the Rochester game.  Leah then headed back to Charleston since she had friends with Senior Day ladies sports celebrations on Saturday.  Trev made it as far as Carlinville late that evening and then sacked out with Kyle and Jenni at their house.

Saturday morning, Trev picked Ken and I up at the rig and we drove to Breese for the football game.  QND played well and won by a couple of touchdowns.  I forgot our camera and so got to use my EVO android phone for the first time to take pictures.  As you see below from the next 6 photos, I think it does quite a good job. 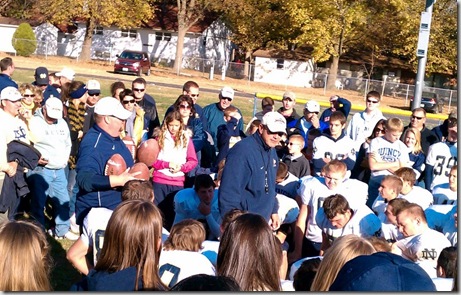 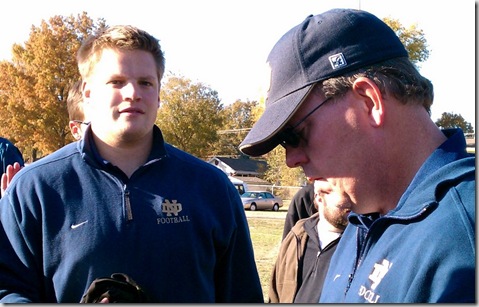 We were all three very hungry after the game and so decided to try out a little restaurant we’d spotted in the small town of Lebanon.  The place is called ‘Uncle Huffy’s Barbeque’.  We were REALLY impressed.  As their slogan says…’Ain’t no que like you Uncle Huffy do!’ I had ribs, Trev had the pulled pork and Ken had the day’s special of a spiced vinegar smoked ham that was something Uncle Huffy said he was trying for the first time.  It was all awesome, especially the sauce.  Uncle Huffy retired his pipefitter job a few years back to follow his true passion of cooking—we think it was a good move! 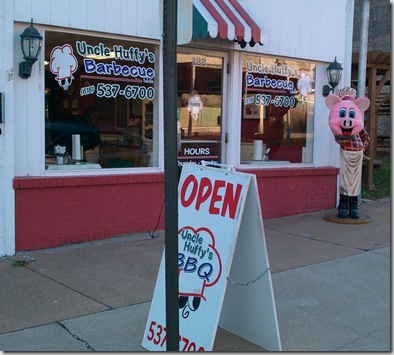 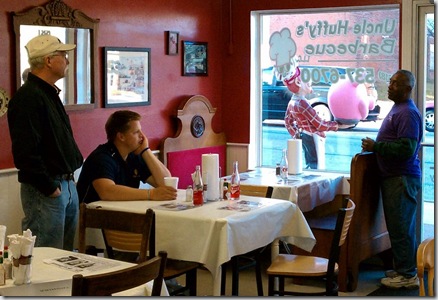 Kyle and Jenni had overnight guests from Quincy on Saturday and we joined them them on Sunday for a picnic lunch on their patio on Sunday. 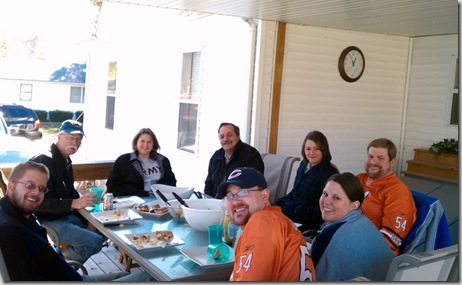 Inside the house is becoming more and more homey as Jenni’s decorating touches can be found all around.  My sister, Kathleen, hand embroidered kitchen towels for each day of the week for a shower gift for Jenni.  Each is a different scene with a dog that she made sure to embroider black like Staley.  Jenni had the Sunday towel on display in the kitchen that day along with lots of hints of autumn decorations all about. 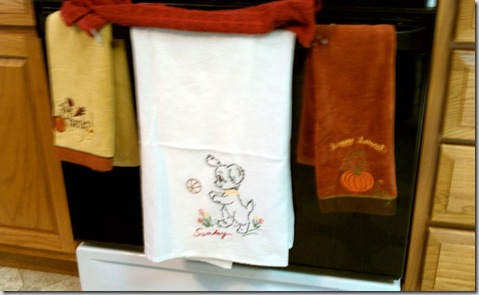 Ken and I headed back to Quincy during the middle of the week in preparation for Trevor’s move the next weekend.

Uncle Buddy Kurk was kind enough to let Trevor borrow his trailer so Ken brought it in to the garage mid-week and we began to load up odds and ends.  Trevor drove in from Chicago and Leah from Charleston on Friday evening and we began the loading. 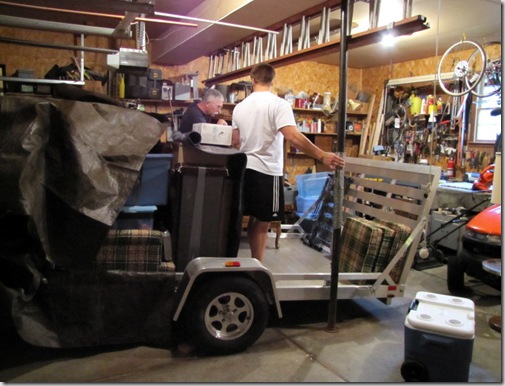 Saturday, the QND team played Rochester at home so we spent that afternoon in the cold autumn winds, watching QND battle hard but lose in the end.

We finished off the packing late afternoon.

Between all the packing and the afternoon braving hours in the cold, Leah was zonked out by supper time!  We were all feeling the same way and called it an early evening.

The next day was a caravan to Springfield.  Ken drove the jeep with the trailer.  I drove Trev’s car.  Trev drove Leah’s bug.  It was pretty windy so we had to take it slow and stop halfway so Ken and Trev could tighten the tarps.  They had done a really good job of arranging everything so it was a pretty uneventful trip with nothing damaged along the way.

We arrived at the apartments about 12:30.  Trev signed his lease and got his keys to Lake Pointe Apartments, #72.  I had not had the opportunity to actually see the apartments before and was very pleased with his choice.  The locations is great, in a new and growing section of Springfield.  The apartment is set up quite well for a single guy, having free high speed internet, its owner washer/dryer, dishwasher, disposal, microwave all included, with lots of closet and cabinet space. Everything looks brand new.  The facilities are a good fit too with parking right outside his private entrance, a 24 hour fitness facility and very nice outdoor pool.

By 3:30 we had everything unpacked and were on our way to Walmart to pick up a few miscellaneous items like a shower curtain and some hooks for hanging pictures.

By 5pm, we had the pictures hung, the bed made,  and left Leah and Trev to cook their first meal in Trev’s new home.

I forgot to get an actual picture of the front of Trev’s apartment, but you can see that if you are interested at the website link above.  I did get some shots of the rooms before we started moving in.

We are now back home and this feels like we’ve just made a move to a new phase of ‘empty nesting’.  When the boys were at college, we figured there would be time when they would come back home for awhile.  But now, with this move, both seem to have transitioned to the next phase of their lives.  I found myself particularly maudlin when I came home because it really does feel like its just Ken and me in this big house now.

So, to keep myself out of the doldrums, I’ve immediately started trip planning.  Next will be a long visit to visit Leah’s family and our #3 son, Luke and his wife, Lindsay in Chicago.  I’ve made hotel reservations since there is no place close to park the RV and its kind of risky to head north this time of year.

It’s also time I started laying out a general plan for our first snowbird trip since we intend to hit the road asap after the holidays and Mother Nature allows.